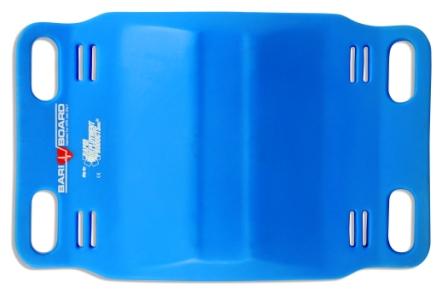 The latest innovation in CPR technology. The BARIBOARD enables the rescuers to deliver more effective compressions then ever before, by simply reducing surface area. Designed to support the torso and spine during chest compressions on persons weighing greater than 275 pounds* This revolutionary design is quickly becoming a must have device for all large adult patients in cardiac arrest.

The raised surface is contoured to the large patients' physical characteristics supporting the spine adn decreasing the surface area therby increasing the effectiveness of chest compressions by optimizing the force of the work exerted by the rescuer.

The BariBoard has 2 surface planes, the raised area and the base area. When doing CPR you can apply the Rules of Physical Sciense (P=F/A). For a given force, if the surface area = (A) is smaller (decresed) the pressure or (force=F) will be greater. A larger surface area spreads out the force, and the pressure or (F) becomes smaller.

Item #
Item Name
U of M
Price
About AME
Career Opportunities
Our History
Our Team
Trade Show Schedule
Why AME?